Read on for a light-hearted analysis of the new candidates, followed by advice on how to use emojis for business purposes.

According to CNN, Emojopedia has released samples of a couple dozen new emojis submitted for approval to the Unicode Consortium, the non-profit that oversees global emoji standards (yes, that is actually a thing). If emoji history has taught us anything–and really, has it?–it’s that almost every emoji, even the ridiculous ones, gets approved. So expect to see most, if not all, of these emojis coming to a smart device near you soon. See them all below (source: CNN): 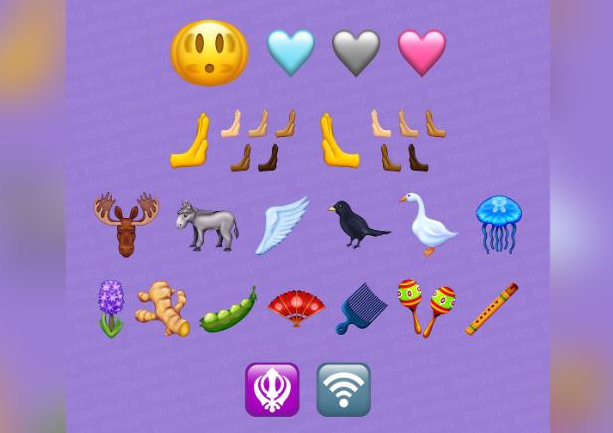 Now, let’s get into some serious analysis. While obviously the moose, jellyfish, and maracas are almost criminally overdue for inclusion, some of the others are questionable. Have you ever actually found yourself searching for a goose emoji? How about a creepily dismembered angel wing? What about that purple flower thingy?

The new face emoji is interesting. He appears to be overwhelmed by choices on both sides. Could this be used if someone is unsure whether to order pizza or Chinese food? Perhaps he is stuck in a time loop? Maybe it’s a contemporary commentary on cubism. It is definitely a good conversation piece regardless, and thus earns a thumbs up.

It could be argued the multi-cultural high-five hands are superfluous, since the piece of ginger already appears to be giving a high-five (and what could be more culturally unifying than ginger?).

Whether we really need more colored hearts is also debatable. There was already a dark blue heart, so what does the new light blue heart represent? It is too cheerful and periwinkle-ish to represent a sad heart. Is it supposed to look like ice, as in a cold heart? It needs a bit of frost on the top to pull that off. Also, why the gray heart? Can you think of a color for a heart that is less needed than gray? If someone texted you a gray heart, would you think they are being nice or being a jack***? Well, of course, you wouldn’t actually call them that–there’s an emoji for it now!

In a move for religious inclusion, the list also features a Khanda, which is the traditional symbol of the Sikh faith. There was a petition up on change.org to get this symbol added. There are many other religious emojis from other faiths already included, so as the fifth largest religion in the world, this was a logical expansion choice.

It’s true that emojis and variety go together likes peas in a pod, for which there is now an emoji! Combined with the several dozen other fruit and vegetable options, the new pea pod emoji allows us to finally get really specific about what we are putting in our salads, without the cumbersome need to type actual words.

That only leaves the raven, Chinese fan, afro pick, flute, and WiFi symbol. All of these would fit right in so seamlessly that I was surprised they didn’t already have emojis.

That’s it for this round of emoji updates, although there will undoubtedly be more options coming in the future. It will be exciting to see which of these emojis are adopted and receive the honor of appearing alongside timeless classics, such as the disco man, the vomiting face, and the smiling, um, chocolate ice cream.

Now that we’ve had some fun reviewing the new emoji candidates, the big question is “do emojis have a place in marketing?” While one must choose emojis carefully and stay mindful of brand identity, the answer is “yes!” In the past, emoji use was only prominent amongst the youth, but today it has gone mainstream. According to Adweek, more than 92% of the online population uses emojis daily, and that study goes back quite a few years now (Source: Social Media Today).

Keep in mind that emoji use in a business setting is often limited to social media. People are split on rather or not it is appropriate to use emojis in emails and more traditional business communications. It is best to avoid the controversy when in doubt, and focus your emoji efforts in more widely acceptable applications. For instance, your business can effectively use emojis on platforms such as Facebook, Instagram and Twitter. In fact, according to a study by Wordstream, using an emoji in your Facebook posts can increase shares by 33% and interactions with your post by 57%. Instagram posts saw a whooping 48% increase in engagement when an emoji was used. On Twitter, posts that included emojis saw a 25% jump in user engagement.

So, with that in mind, get out there and start having fun dabbling in emojis!

Our Services
What can Ciniva do for your company?
Learn About Services
Ciniva
New Emojis are Here!
Menu
Ciniva
Close
hello@ciniva.com
(757) 499 - 1990